An evaluation of Apple’s decision to launch Apple Pay in the USA can firstly commence with an analysis of Apple’s own description of Apple Pay. The perception is created that the company is attempting to redefine the mobile payments market (Apple, 2014). This is because whilst it seeks to eliminate the need to use cash payments, it’s proposition to the market is to act as an intermediary between the card provider, the consumer and retailers in store by providing a safer solution that would only allow a transaction to be processed through fingerprint recognition (Apple, 2014). Apple also proposes an online solution through its check-out technology for online transactions which uses Apple’s passbook system (Apple, 2014). Retail outlets already function with near field technology (NFT) and other hardware associated with big bank card providers. Instead of introducing a new system which requires card providers and retailers to adapt their hardware and equipment, ApplePay integrates with solutions that are already in place. Card based transactions comprise of card-present and card-not-present transactions, with the former category posing a higher risk of fraud (Devit et al., 2014). The benefit Apple aims to bring, is to significantly lower the risk of fraud for all stakeholders through an innovative approach that would mean all solutions related to Apple Pay. Whether carried out in person with a mobile phone, or online through Apples app solutions, transactions will qualify as Card-present with a reduced risk. If Apple Pay is successful, it will assist the company to remain relevant in the market as part of consumers’ daily routine where it will continuously receive an undisclosed commission on the cumulative transactions carried out by consumers who embrace Apple Pay. In accordance with the Ansoff matrix, market expansion can occur in four distinct ways (Dibb et al., 2012). One of these ways is by providing a new product or service to a current market, which develops and retain existing customers. When interpreting Apple’s latest move in relation to the use of generic routes to competitive advantage, it appears that the tech giant is opting for at least two such routes to exploit an opportunity. This includes intense focus and differentiation (Dibb et al., 2012). Concerning the former route, it is the decision to focus intensely on mobile payments and the latter would be to differentiate the offering sufficiently from existing market solutions to redefine the market for consumers. It is stated that a market opportunity analysis should take into consideration several considerations, which includes external, financial and internal considerations which are firm specific (Stevens, 2012). In order to further investigate, discuss and evaluate the market opportunity that Apple sought to exploit, it is appropriate to consider various elements, including an overview of the market, a PESTEL analysis of the external environment and the competition, whereas internal and financial considerations, may be more relevant to the firms strategy, which is beyond the scope of this essay.

A broad overview of the mobile phone payments market revealed that it is predicted to see significant growth in the near term. As figure 1 below suggest, this market will almost double by 2017, when three proposed sub categories of mobile payments will reach a combined value of $90 billion per annum. It can be argued that this change is not only as a result of technological enablement, but also a sociocultural shift as more people use social media. There is a real prospect that mobile devices will lead to a shifting consumer trend, towards a cashless society (Gee, 2014) .This provides a clearer view of the opportunity Apple may be attempting to exploit.

Considering that figure 2 suggests the global mobile phone market is only expected to reach it’s peak by 2030, the growth prospects for Apple is considerable over the next 15 years if the company manages to secure a firm foothold in it’s home market, the USA. 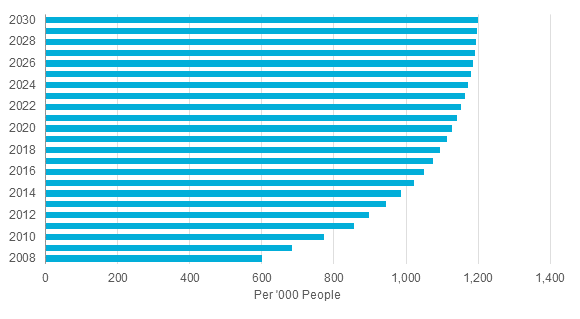 The predicted growth in mobile proximity payments in the USA between now and 2017 appears to be at a higher ratio compared to the amount of new mobile phone subscriptions globally and in the USA. This is indicative of a change in consumer behaviour and that many of those who will adopt various forms of M-payments, already owned mobile phones in the past. In terms of the credit card market itself, the card issuing banks who collectively manage 83% of credit card transaction volume in the USA includes brands such as MasterCard, Visa, American Express, Bank of America, Citigroup, Wells Fargo and J.P. Morgan Chase.  (Reuters, 2014). It is claimed that ApplePay already has the support of the aforementioned banks and at least 83% of the card market (Reuters, 2014).

In addition to the aforementioned market overview, there are external environmental factors were considered through a PESTEL analysis. Firstly, concerning political aspects, The USA is considered a country where political empowerment has increased unfettered market access with more free and fair trade (Utting, 2012). This is not to say that the world belief the USA is free from protectionism, in fact academics from within the USA as well as some at the World Bank believe that since the 2008 crises, protectionism has been on the rise (Kee & Neagu, 2008). The country regards itself as a stable democracy where the rule of law is operative (CIA, 2012), besides having numerous summary killings of ethnic minorities by police officers without allowing the diseased an opportunity to a trial (BBC, 2013; BBC, 2014). Secondly, concerning the economic situation, the US has a GDP of 16.8 trillion USD which is projected to grow at 3% per annum and is the highest GDP of any single country in the world (WorldBank, 2013). Analysts argue that having emerged from the recession in 2008, the US is currently going through a mid-cycle expansion (Hofschire, 2014). Currently it is still the case that the US is the largest single consumer market in the world and enjoys a dominant consumer culture which is influential around the world (Burman, 2007). In the present environment, the US experiences relative economic prosperity coupled with continuous technological advancements. Thirdly, concerning the social environment, unlike its two biggest economic rivals, the EU and China, the US has a higher rate of population growth (World Bank, 2014). Although China’s median age is slightly younger, it cannot rival the US in terms of relative population growth due to the effects of the one child policy (Jing, 2013). The US also has an ageing population and it is worth noting in according to the needs of the population, that older people are specifically targeted by credit card fraud (FTC, 2014). Fourthly, concerning technological factors, according to PWC, near field communication (NFC) technology has already been available since 2003, however more recently quick response bar codes (QR) have been introduced as a potential disruptor to NFC (PWC, 2011). However, QR codes are less secure and subject to fraud, which represents a further opportunity to Apple to integrate with NFC instead. Already in 2011, solutions such as a Digital wallet was developed as an alternative (PWC, 2011). Google also announced the launch of a digital wallet in 2010, in partnership with MasterCard, Citigroup, Sprint and VeriFone when it released a new Android operating system that could be used by NFC in 2011, at which point Google claimed that the mobile wallet will not compromise on security (PWC, 2011). Security analysts backed ApplePay as a more secure payment method over other existing solutions, arguing that it will protect consumers from data breaches (Litan, 2014). It can be argued that the ability to facilitate technological integration has been a key enabler of the opportunity seized by ApplePay. Fifthly, concerning environmental concerns, it can be argued that despite the US being frequented by hurricanes, there are relatively few other environmental disruptions that would prime the consumer towards choosing cash over card and online payments. In this regard it can be argued that cash may become a secondary, contingency payment source, with card and online payments becoming more and more dominant. However emerging technology is not to be underestimated, as it may influence both the technological aspects and competitive environment: A very strong consortium of retailers did not seem to accept Apple’s quest for dominance. They abruptly cancelled the NFC system which is required to process both Apple Pay and Google Wallet payments. Instead this group of retailers have announced that it aims to launch their own rival system in 2015, called CurrentC (Carey, 2014).

This is of significance because even if the majority of card providers and consumers approve of Apple Pay, if a large proportion of retailers reject the payment system outright, it would limit Apple’s prospects for seizing a significant market share.  Lastly, in the case of the US, any analysis would be incomplete without taking into consideration the legal environment. It can be argued that Apple as an organization may feel emboldened to raise legal barriers to competition. This is because the legal system already shielded Apple’s intellectual property by awarding damages in relation to copyright issues of around one billion dollar to Apple (BBC, 2012). This can be regarded as a significant entry barrier to Samsung. The question is now, whether Apple will attempt to seek similar legal provisions for intellectual property: Will it now attempt to raise an entry barrier for any competitors who match the capabilities of Apple pay? Would smaller competitors be afraid to challenge Apple because a clear history exist of successfully raising legal barriers to entry? Next this essay will focus on market definition and analysis.

You may want to read more about the market segments and windows of opportunities next. 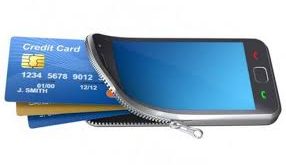